This week Paragon Painters completed a complete exterior painting job on a house in Hanahan SC. 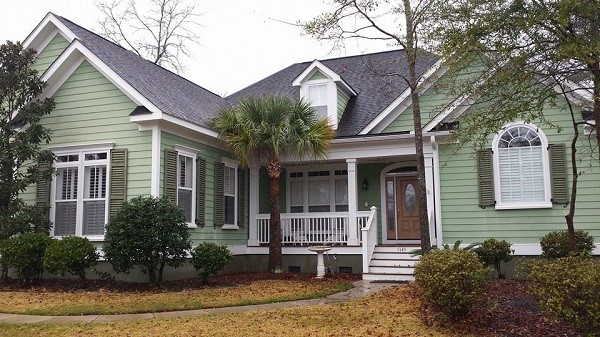 The house was badly faded from a combination of sun exposure and the previous use of lower quality products. We upgraded the paint to Sherwin Williams Super Paint on the entire exterior. The high-quality paint will stand a far better chance of color retention in the harsh South Carolina summer months than what was used before. Every butt joint on the hardy plank was cracked and the same went for around all the trim and windows. To fix this we used Sherwin Williams 950a caulk and completely re-caulked the house prior to painting.

The wooden shutters on the house were also in bad need of attention. They were painted flat last time, which we changed to a gloss finish. Many of them were peeling and cracked. After a lot of scraping, sanding, caulking, priming, and painting the shutters looked good as new.

The trim on the house held up fairly well since last being done with the exception of the higher peaks. They were peeling badly because the last painter didn’t prime the bare wood, instead, they just painted two finish coats. We scraped and primed them with Peel Bond and gave the peeks two coats while the rest of the trim on the house only needed one.

Prepping this house prior to painting was the most time-consuming part of the job. We used a lot of caulk because there wasn’t a single spot of old caulk still intact. We also had to deal with a lot of rust bleeding through the previous coating on the railings which were scraped and primed before painting. 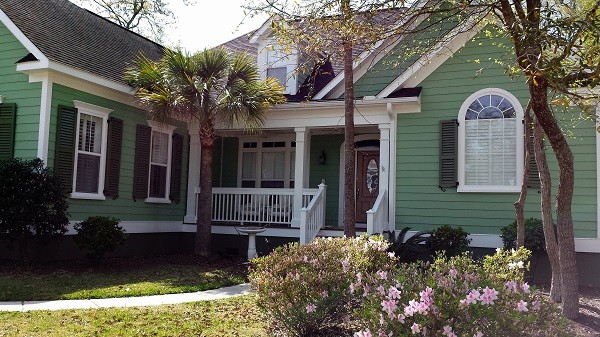 The Details Make the Job

I love doing the little details on a house, they really make it stand out. All the shutters have three hinges and brackets to hold them open. They are faded and on the verge of rusting. We gave them two coats of Rustoleum oil based paint in black gloss. While we were at it I painted the mailbox post which also happened to be black and the hatch leading to the crawl space.

Is your houses’ exterior in need of some repair and paint? Give Paragon Painters in Hanahan SC a call! We’ll provide you with a free, no obligation, written proposal, you’ll be happy you called.  843-695-9450

If you are looking for Painters in Hanahan SC, give us a call at 843-695-9450 or complete our online request form.