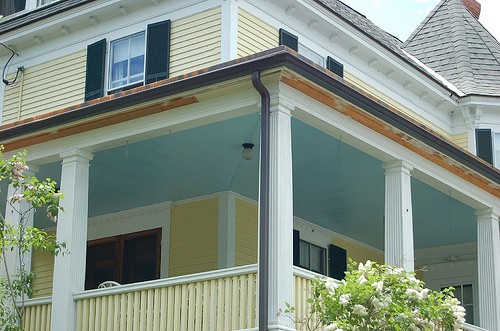 If you have ever visited the Charleston / Savannah Low Country area you’ve probably noticed that many homes have their porch ceilings painted light blue.

When I first moved to the area I noticed the blue porch ceilings immediately. My first thought was that they painted the porch ceilings blue to mimic the sky. I then recalled hearing a myth saying a blue porch ceiling could trick bugs and birds into thinking it was the sky and they wouldn’t build nests on it. Still curious I asked a few locals and learned the proper name for the blue ceiling color was called haint blue.

What is Haint Blue?

The word Haint is a variation of the word haunt, and the light blue color is meant to look like the color of water. So the ceilings were not painted blue to mimic the sky after all! After some research, I learned the color stemmed from the local Gullah Culture. The Gullah’s believe haints (aka ghosts, haunts, or restless spirits) could not cross water and the light blue color would trick them from crossing into the home.

Who Are The Gullah?

The Gullah are an African American subgroup which resides in the Charleston / Savannah low county region. They are descendants of slaves and have a belief system that’s both a mix of African witchcraft and Christianity. The Gullah are also originators of haint blue, a painting tradition that continues today. In many cases, they used the color not only on porch ceilings but on windows, doors, and in extreme cases the entire house. What’s interesting is there’s no exact haint blue color, just about any light blue will work. Back when the tradition began paint was made from whatever pigments could be found on hand so there is no universally agreed upon color. 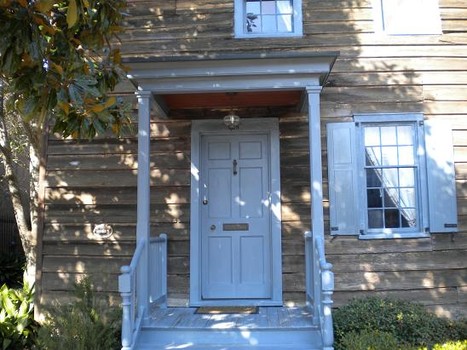 As I stated above, there is a myth that painting a porch ceiling blue will help repel bugs from nesting on it. Back when haint blue was started there was actually some truth to that myth. In that time period, paints were milk based, which wasn’t nearly as durable as the paints today. It was made from a mixture of milk, lime, and indigo dye. Lime, being a natural insect repellent probably did help keep bugs off porches painted Haint blue. So there may have been some truth to the myth after all. Now that doesn’t mean you should run out and paint your porch ceiling blue, nowadays the majority of paints are oil and latex based and do not contain lime.

While there is not an exact haint blue color, below are some that are commonly used. 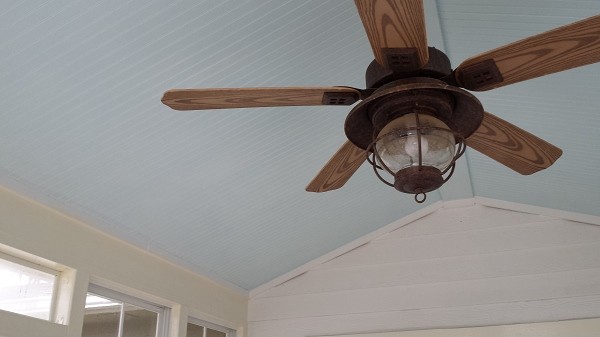 The Gullah Were on to Something!

Whether or not you believe Haint blue will keep your house free from unwanted ghosts and bugs the color has a certain charm about it. It adds a nice accent to your homes exterior while providing a calm comfy feeling on those lazy days relaxing on the porch. So what do you say, are you ready to paint the porch ceiling blue?

If you are looking for a trusted SC Painting Contractor, give us a call at 843-695-9450 or complete our online request form.