Paragon Painting has just finished one of our biggest painting projects of the year. This project including almost all areas of what we do. From kitchen cabinet painting, popcorn ceiling removal, interior painting, wood staining, and even some wallpaper border removal. We still have to go back to do a custom garage floor coating once they have the garage cleared out. 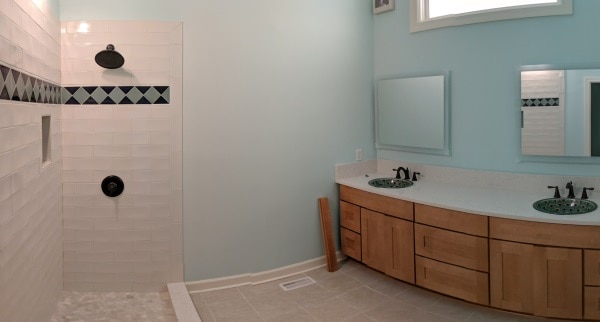 We started this project by removing the popcorn ceilings. Every room of this house had popcorn, and it had to go! First, we covered all the floors with 4mil plastic, then used a paint sprayer to wet the ceilings and remove the popcorn. After all the popcorn was scraped we could then move onto the mudding phase. Every single edge, joint, and nailhead was mudded twice then sanded smooth using our dustless sanding system.

I’m really kicking myself for not taking some pictures after the popcorn was removed, but I can’t go back now. The difference just removing the popcorn makes is indescribable. The whole house feels much cleaner and bigger at the same time.

Anyway, after everything was sanded smooth caulked around every edge, primed all the ceilings, and painted them two coats of white flat ceiling paint.

Prepping the Walls and Trim

Once we were finished with the popcorn removal the major work could begin. We left while other contractors were installing new lighting fixtures, remodeling the master bathroom, redoing the railings in the upstairs hallway, and they replaced all the flooring.

When we returned about a month later we were ready to really take this house to the next level. Unfortunately, as awesome as it would be to just start painting everything we had A LOT of prep work to do first.

This house, which was built in the 90’s, for some reason was not screwed. Instead, they used nails when installing the drywall. Of course, the majority of them were popped and needed to be hammered in and mudded. It also appeared as if there was once wallpaper throughout the house that was poorly removed and hidden with cheap flat paint. The walls were scarred from the previous removal and they needed major amounts of mud to repair them. Of course, all the mud was then sanded with our awesome dustless sanding system and primed.

The trim also needed a lot of love. There were a lot of open cracks that were recaulked, runs that were sanded, and old dents/holes filled. The new trim that was added also got caulked and had the nail holes filled. 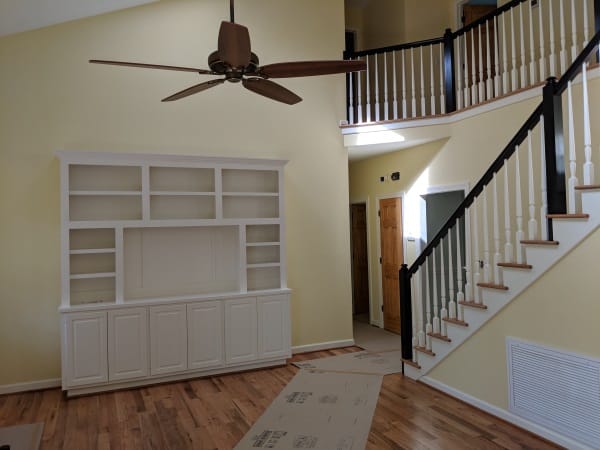 The new doors have to be one of my favorite additions to this house. Every door in the house was replaced with six-panel pine doors that come unfinished, I believe there were 23 of them. The first step to staining unfinished wood is to clean them. You’d be surprised just how much dirt and marks are on these things from new, not to forget the pencil marks from when they were installed needed to be removed. They were all cleaned with paint thinner and Krud Kutter was used for the pencil marks and more stubborn spots. After cleaning all the doors were sanded with 220grit sandpaper.

Finally, it was time to stain! We stained them with Sherwin Williams oil WoodClassics and the color was Golden Oak. After staining we then sanded them again, this time with 320 grit sandpaper. Once sanded and dusted they were ready for polyurethane. We urethaned them each with three coats of AllPro Gloss Clear latex polly while sanding and dusting between each coat. 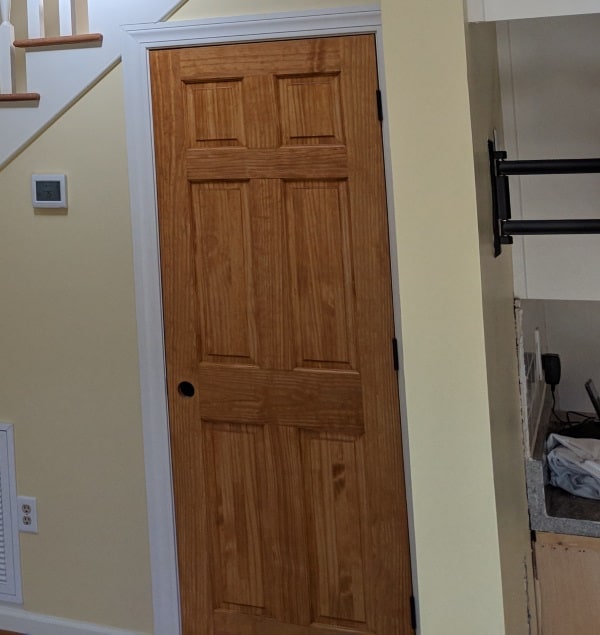 Okay, so maybe this was a tie for my favorite addition to the house. They removed the knee wall in the upstairs hallway and replaced it with new railing. What a huge improvement it made! The spindles came finished but in a bright white so we painted them Benjamin Moore White Chocolate to match the rest of the trim.

The handrail and posts were bare wood. First, the wood was primed with Benjamin Moore Fresh Start tinted to as close to black as they could mix it. From there used PPG BreakThrough Gloss tinted to Charleston Green and gave them three coats. 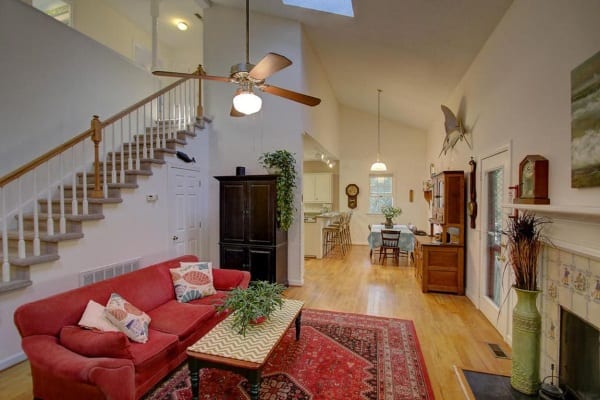 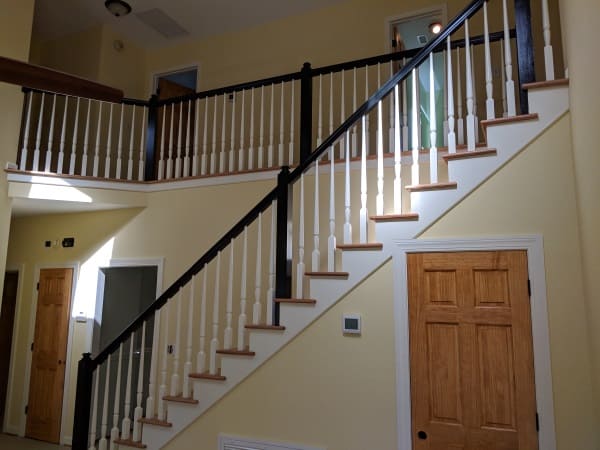 Painting the Trim and Walls

After all the prep work was complete we were finally able to put some color on the walls! All the trim was painted two coats with Sherwin Williams Cashmere Medium Luster tinted to Benjamin Moore White Chocolate. The majority of the walls were painted with Cashmere Flat Enamel with the exception of the kitchen and bathrooms. In those areas, we used Sherwin Williams SuperPaint Velvet for some added washability. 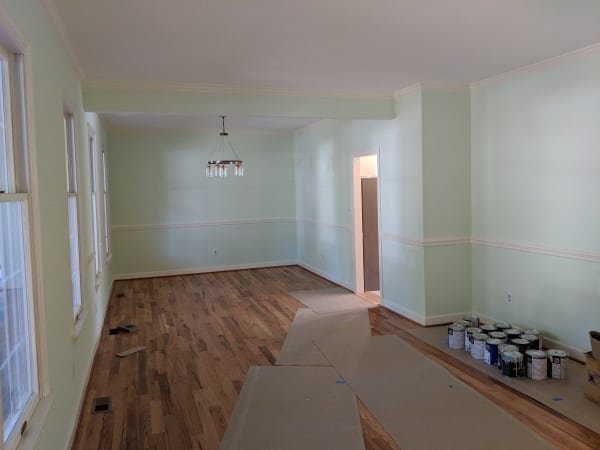 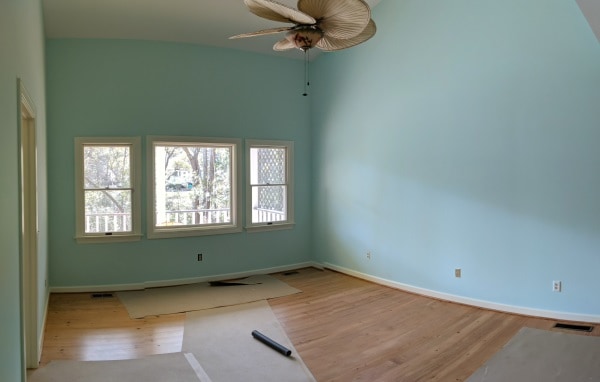 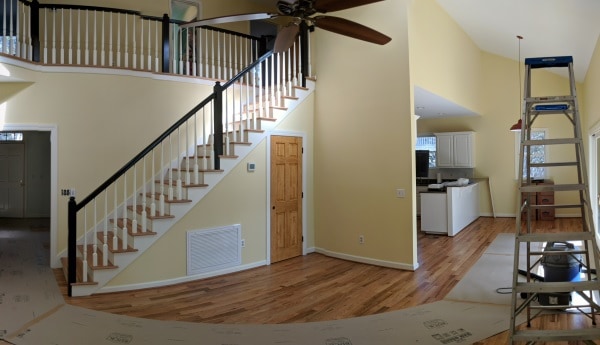 The last stage of this project was painting the cabinets. There was a mix of different cabinets throughout the house. In the laundry room and one upstairs bathroom, the cabinets were bare wood. The built-in unit in the family room was already painted, but it was painted latex over oil and easily scratched off. The kitchen and other two bathrooms were painted and not scratching off too easy, however, the texture on the doors was very rough.

We sanded and sanded some more. I removed as much of the pealing latex off of the built-in unit as possible and sanded all the rough texture on the other cabinet doors smooth. We then took all the doors to the shop to be sprayed and brushed and rolled the frames in place.

The doors were all primed with Zinnser BIN which is a shellac based primer, then sprayed two coats of PPG Breakthrough Satin White Chocolate to match the rest of the trim in the house. 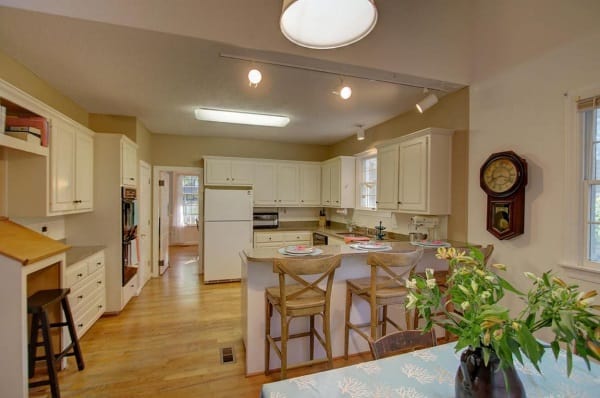 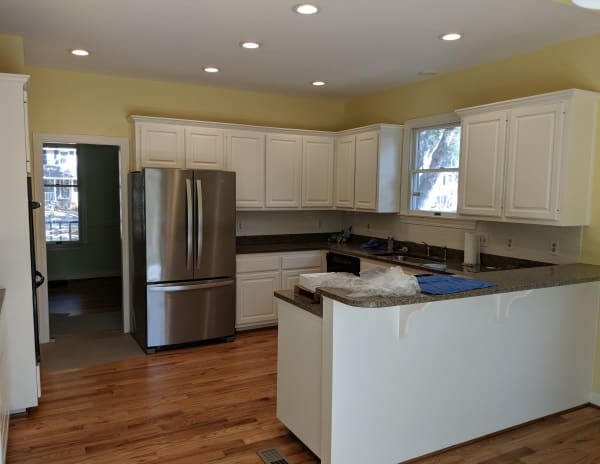 As you could tell this was a very big project with lots of moving parts. Between us, electricians, carpenters, plumbers, floor guys there was a lot going on here. Givin that it was one of the smoothest projects I’ve ever been a part of. The homeowners were fantastic to work with! They had a vision of what they wanted the house to be and went for it. Scheduling was amazing. Each trade had the time to do what needed to be done without interference. Everyone involved worked together and communicated with each other to accomplish this amazing project with ease and that’s what it’s all about.

Big thanks to the homeowners who put together this collection of tradesman which made this job a joy to be a part of.

If you are looking for Complete Interior Painting in Charleston, give us a call at 843-695-9450 or complete our online request form.